Our iOS Developer Hans at WWDC 2015

At iCapps, we have a long tradition of attending WWDC, and this year I was lucky enough to get the opportunity to represent our company at the conference. If I could get hold on a ticket that was… I remember the evening of the ticket lottery, seeing my Twitter feed being filled up with people respectively tweeting their excitement or disappointment for being elected or not. Unfortunately, I was part of the latter group, receiving the notorious “better luck next time” mail from Apple.

I settled with the thought that I’d have to wait for at least another year to be able to try to win a ticket, until I got a phone call from one of my colleagues, with some surprisingly good news. He told me he did get a ticket, but that he had recently decided to focus on web-techologies, rather than iOS. He thought it would be more appropriate for me to attend the conference, so he was willing to offer his ticket to me. That’s just how great my colleagues at iCapps are.

I was able to transfer his ticket, and with some detour, I ended up on a plane to San Francisco, ready for my first WWDC! In the following sections, I will try to give a summary of my experiences during that week. I won’t get all that much into detail on all the technical stuff that was announced - I think the session videos that are available on the developer portal by now are better suited for that - but rather give an overview of what struck me most during my first developer conference. Look at it as the mental notes from a “dub dub” virgin:)

"Everybody in the room expected the much rumoured Apple TV announcement, to end up with yet another music service" 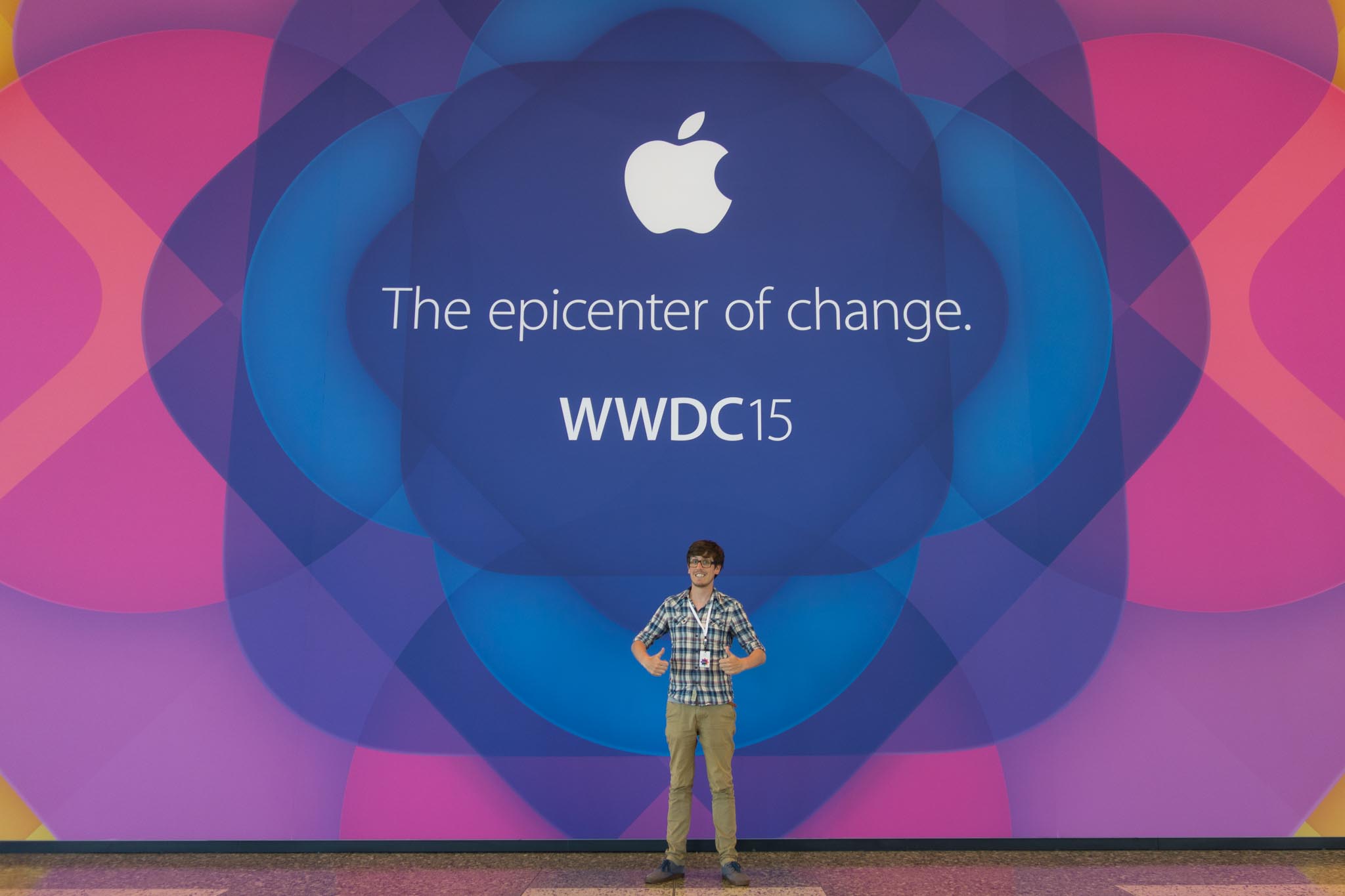 After picking up my conference badge on Sunday, I met up with some fellow Belgian iOS developers to queu up for the keynote. Although we joined the line at Moscone Center at around 4 AM (which I thought was pretty early), the queue had already filled up half the block around Moscone. After some compacting of the line, we ended up in front of the conference center, which would guarantee pretty good places during the keynote according to some WWDC veterans.
After waiting for almost 6 hours, we were allowed to enter the keynote room. I was really surprised how big it was: I always expected we’d have to fight for a decent spot, but it all went pretty smooth. We even managed to keep 2 spots in the front area for 2 Belgians that had to leave the queu to pick up their badge because they didn’t manage to get it Sunday. Although I’d say the whole getting-up-early-and-queue-for-hours is all part of the buzz around WWDC, I think you could also just come around at 9 AM if you want, if you can bear with a seat in the far back of the room.

Right after the keynote, I honestly had some mixed feelings. Apple managed to keep on raising the excitement level in the room throughout the whole presentation. From the hilarious opening movie, over the El Capitan preview (they should really give Craig Federighi his own tv-show) to the new iPad multi-tasking features and Apple Watch advancements, coming to a boiling point when Tim Cook presented his last slide, mentioning the famous OMT sentence… Everybody in the room expected the much rumoured Apple TV announcement, to end up with yet another music service. For me, this was kind of an anti-climax to the whole show, and it felt like the majority in the room shared more or less the same feeling. I just don’t think this was “one-more-thing”-worthy, at least not for a developer conference.

The initial feeling that WWDC 2015 was not going to be a “big” edition, quickly faded away after attending the Platforms State of the Union session, later that day. After seeing an overview of all the advancements in Swift, auto-layout and Xcode, I was quite assured that this was going to be a fully packed and inspiring week. 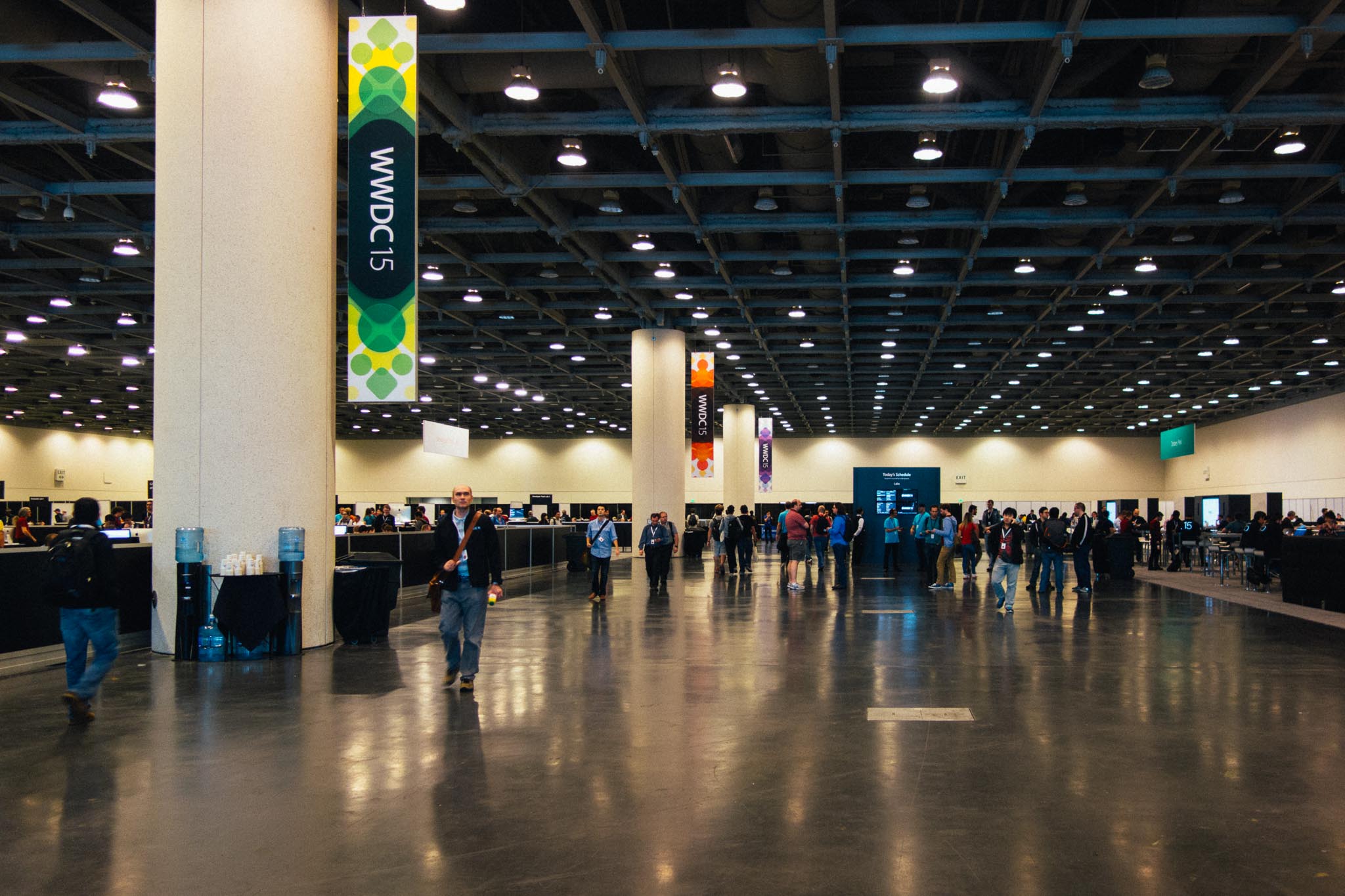 "It wasn’t a bug in my code, but in the UILabel code!"

It’s probably the single most given advice by people who attended WWDC before: go to the labs. But seriously: do go to the labs! At the ground floor there is an enormous hall, packed with Apple engineers ready to give you advice on any possible technical topic. At first I felt quite intimidated: getting to show your code to the people that actually engineered the frameworks you’re building on top of, made me a little nervous. I decided to go to the Cocoa Touch desk/stand/… , to ask for some help on an issue I recently had at a client, related to animating a UILabel. I prepared a small sample project, isolating my problem so I could clearly show it to one of the Apple engineers. I paid double attention to clearly formatting my code, and making sure I made no stupid programming errors. After all, you don’t want to make a fool out of yourself in front of an Apple engineer... I was a little afraid of the reaction I would get when asking for what seemed to me like something trivial: animating a UILabel is not exactly rocket science I guess.

I explained my problem to one of the engineers, who looked genuinely interested in solving my problem, assuring me the question I had wasn’t stupid, and should be solved. He spent around 10 minutes on the code with me, but had to apologyze for not being able to solve my problem. He directed me to a female colleague of his, who apparently used to work on the UILabel code source code. After showing my animation bug to her, she pulled out "some crazy debugging sh*t” (these were her exact words), to find out that it wasn’t a bug in my code, but in the UILabel code. She asked me to immediately file a Radar, and tweet her the ticket number, because she wanted to fix this issue as soon as possible. So I did, and the next day - to my surprise - she replied on my tweet, telling me she had fixed the bug and that it should be available in seed 2 of iOS9. I felt pretty proud of myself :)

Fact: I’m not that good of a “networker”. But one thing I’ve learned, is how easy it is to meet great new people at WWDC. Because you are basically queuing all day long for the sessions, you quickly end up talking with the people that are standing in line with you. Sometimes, you can also just rely on plain luck/coincidence. As a personal project, I’m made an app for showing Flickr-albums on a Chromecast. Because my app recently got rejected due to some metadata issue, I decided to visit the App Store lab, and ask for some advice in order to get the app approved.

After the lab visit, I went to the next session. I opened up iTunes Connect to re-submit my app, when someone sitting on the row behind me taps my shoulder. He asks me whether I’m working on a Chromecast app for Flickr, and whether we could talk right after the session. Turns out, the guy is working in the iOS team at Flickr, also thinking of adding Chromecast to the app as a side project. Getting to show my app to a guy actually working at Flickr felt pretty cool, even though it means my app will probably be sherlocked by their own app in a couple of months :) 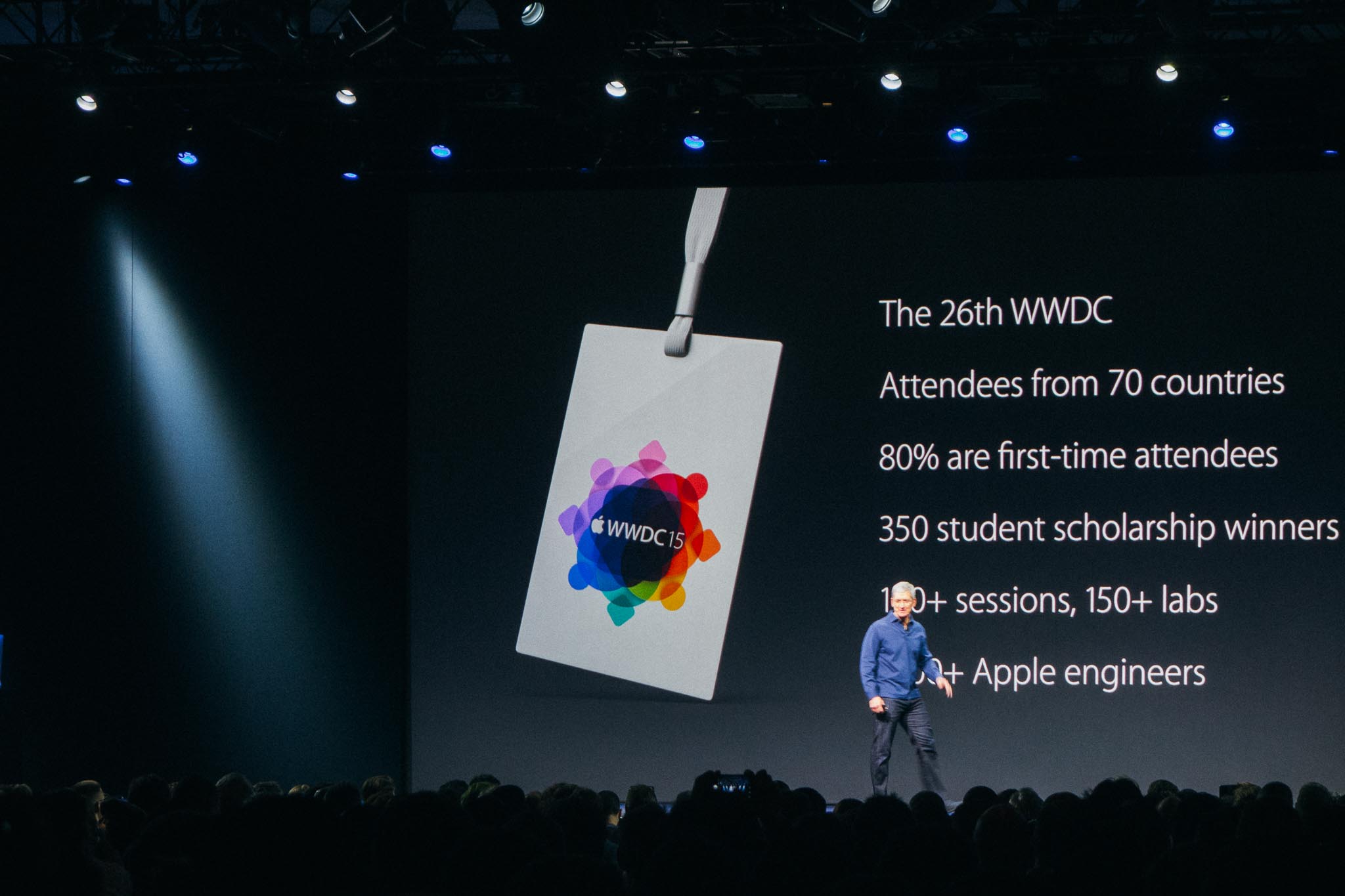 Apart from the main conference, you can choose to attend some of the many WWDC-related events and parties. Some of which are just good for their free food and drinks, like the Fabric party. Others try to add a little extra, like the Foursquare event for example. Apart from the (excelent) free beers, they gave some really interesting talks about some of their app components they had recently open-sourced, and about how they split up the original Foursquare app into 2 separate apps (Foursquare and Swarm). It was really great to get a taste of how it is to work at a popular startup, and also: getting a chance to check in at Foursquare is pretty cool :) As a closure to the conference, Apple throws it’s own party, called “The Bash”, where you can find yourself standing next to John Gruber or Tapbot Paul, talking to an Apple TV engineer. I tried asking whether I should come back in September for “something” new. He told me I could come back anytime :) 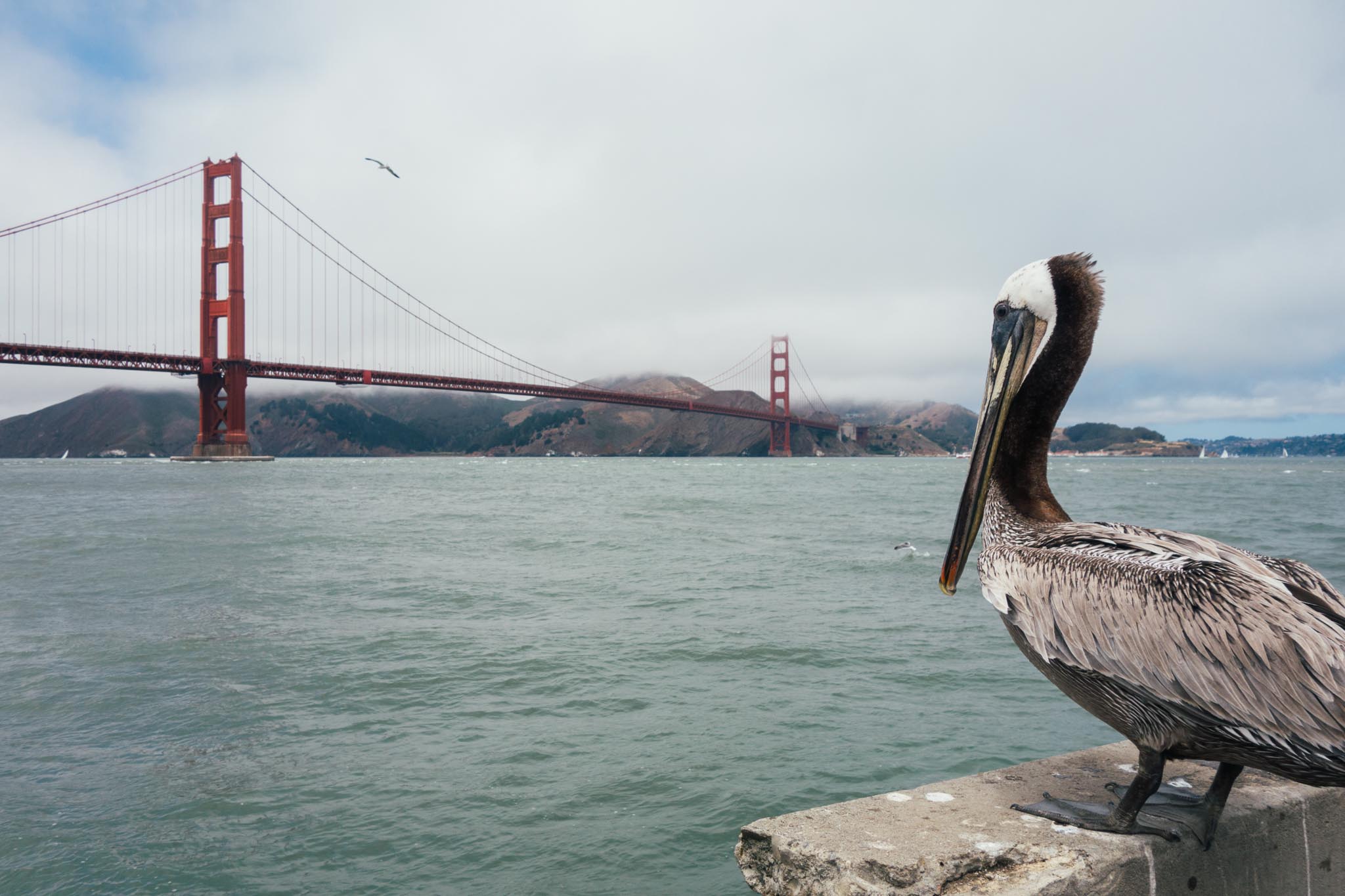 To be honest: WWDC really topped all my expectations. The inspiring atmosphere really is something to experience. It might not have been a “big” edition, and there were some signs that “something” had last-minute been dropped from the conference schedule (some sessions were quite short, some were repeated, and apparantly there were fewer parallel sessions than previous years). But still, even without a big reveal, there was enough interesting stuff to keep me excited for a whole week, and probably the coming months.

Niels Delporte flew down to the sunny city of Barcelona to soak in the talks about UX, development and communication at the ADDConference. Niels came back with a ton of inspiration. This particular blog post will explore key takeaways about communication and collaboration from ADDC.

The 4 highlights of SuperNova 2018

“Embrace the future, because tomorrow is unstoppable”, was SuperNova’s main slogan. It’s no surprise then that we immediately felt at home at the event. What’s more, our hot innovation topics AI, AR and conversational interfaces were very much present in the many keynote talks. We want to talk about the four highlights of SuperNova 2018 which are relevant to our innovation tracks at icapps.